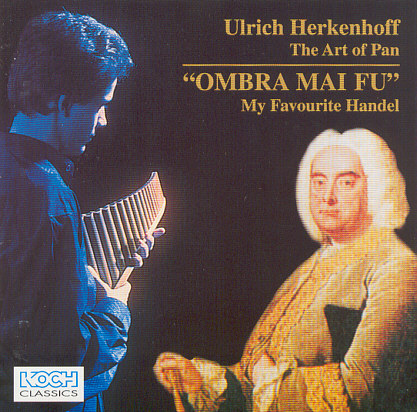 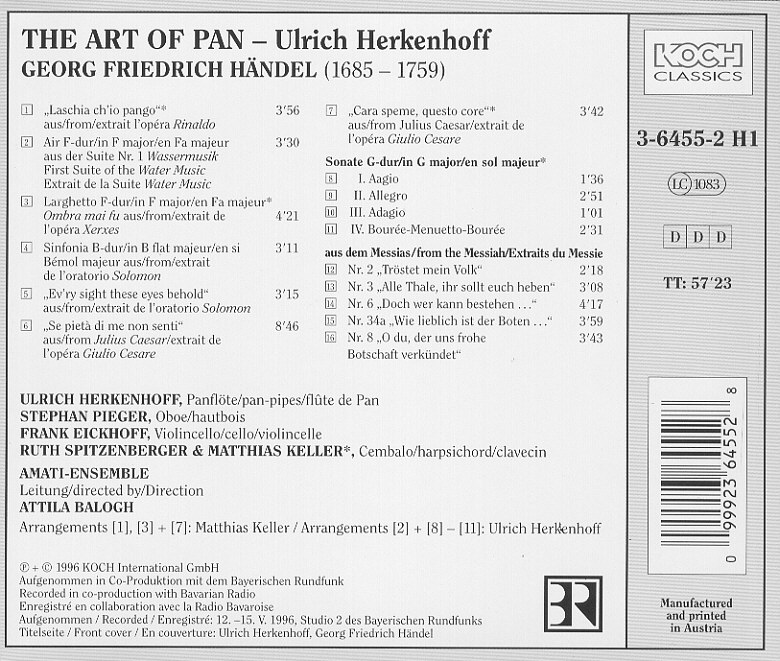 That’s right: this is an hour of Handel’s music, in arrangements for pan-pipes and chamber orchestra. Don’t get your nose out of joint: the idea may be a little hard to swallow, but it works beautifully. Herkenhoff’s pan-pipes (man-made, of course) have a timbre not dissimilar to that of the soprano recorder, although the former instrument is more plangent. The pan-pipes don’t share the recorder’s intrinsic agility. Still, Herkenhoff nevertheless is capable of remarkable things. One of the signs of a successful arrangement is that it doesn’t make you miss the original. Herkenhoff succeeds on this count. Another sign is that a reveals a new facet of the music. This sign is harder to evaluate than the first, but I feel that Herkenhoff has succeeded here as well. This is Handel with the smell of the wild mountains in his nose - out of the palace and onto the mountainside, tending his sheep, just as he wrote in Messiah.

Herkenhoff is not the first pan-piper to do a Baroque album. The artist named Syrinx has done some charming collections of music by Bach and Vivaldi. This is the first pan-pipe CD I’ve seen that is devoted to a single composer, however. Lest anyone questions Herkenhoff’s credentials, he also studied classical flute, and he has commissioned works for pan-pipe by contemporary composers. He studied with that most famous of pan-pipers, Gheorghe Zamfir, and he has worked with Marcel Cellier, the man who brought Le Mystère des voix Bulgares to the West. Herkenhoff is a musician who is comfortable pollinating classical music with folk elements, and vice versa.

Performances by Herkenhoff and the Amati Ensemble are in a modern style, but not unfaithful to Handel’s spirit. The recording, made with the assistance of Bavarian Radio, is a delight to the ears. This may be one of the most unusual CDs I’ve reviewed all year, but it’s also one of the least pretentious and most sensually pleasing.